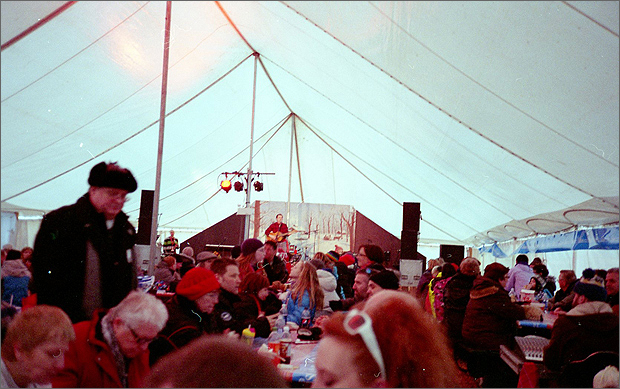 I’ve always heard of Festival du Voyageur being promoted after New Year’s, yet never get the chance to visit the Voyageur Park and witness what happens there. I’m terribly an anti-winter person and I get cold easily, so the thought of staying outside for longer periods of time is just a dreadful idea. However, I already have come into terms with me being a) Canadian and b) Winnipeger so being outside is just the way to go, even if it is cold.

(Also I am disliking the idea of being a tourist in my own city.) 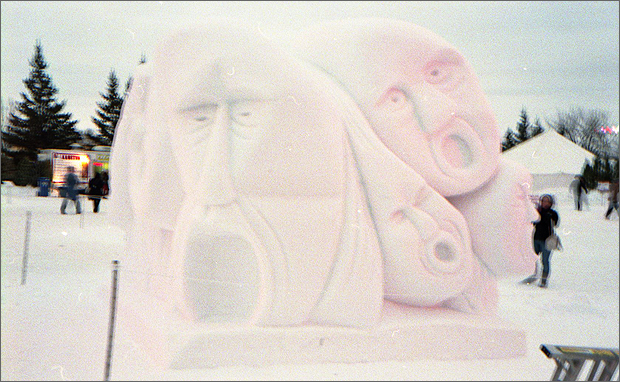 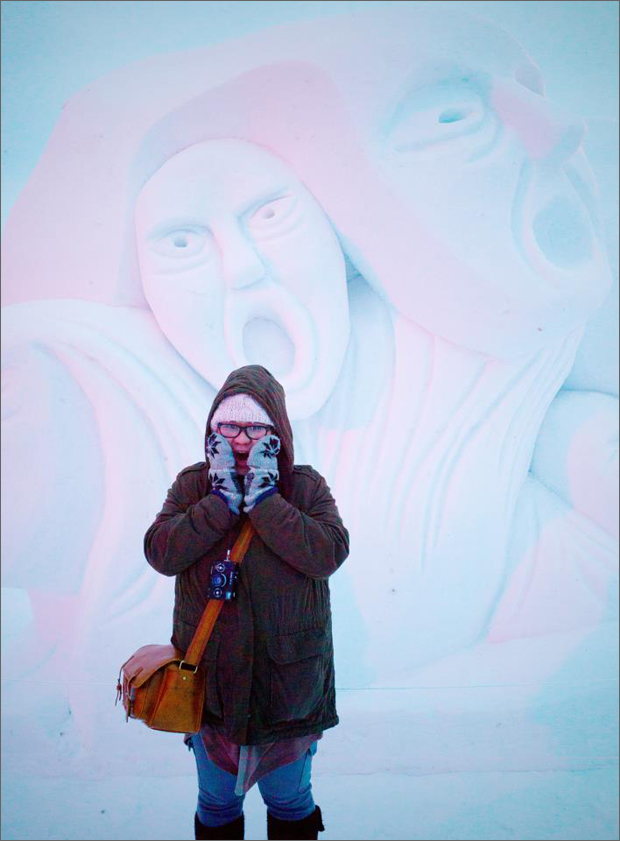 Only decent photo I had from that day. Thanks P. 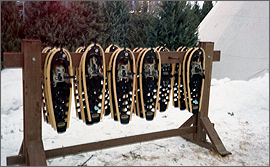 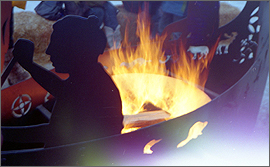 Snow shoes (because there’s lots of snow) and small areas with a fire place (because it is cold; I cannot reiterate that enough)

My dear friend P and I set out to go to Voyageur, including his friends from uni, N and G. It’s more of a photo trip actually, as our party loves to take photographs. Knowing that makes me really happy and an assurance me that this is going to be worth it. 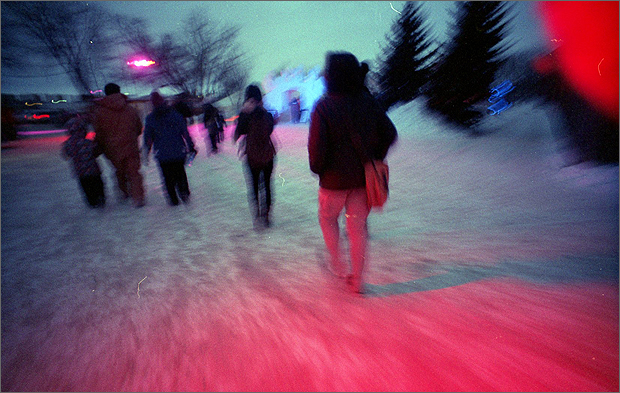 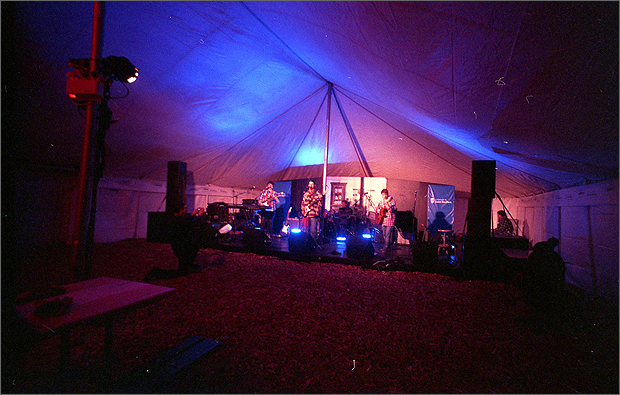 Gear notes: I brought three cameras, but I only ended up using two. I was trying to use up films in a couple of my cameras, but because it was cold, it didn’t work out as planned. LC-W was my main shooter, side-by-side with my Rollei 35S. 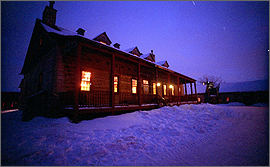 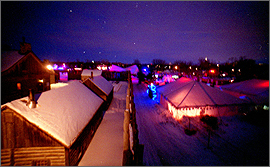 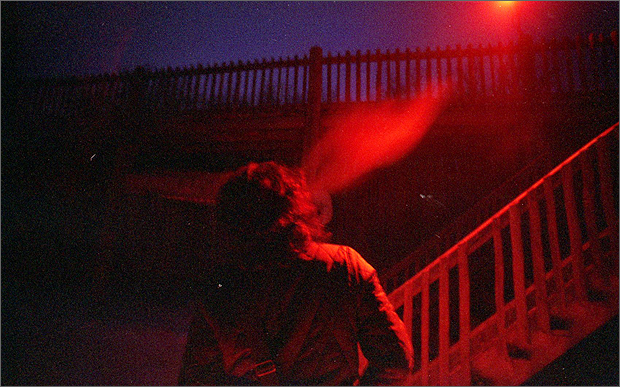 I really like this photo of G. We were on our way up the fort and told him to hold it while I take a photo. Looking pretty cool here, I say.

Anyway, our party arrived the Voyageur Park just about when the sun sets. Of course this means dipping temperature (ack). We were able to catch the last batch of people carving snow (which were amazing btw), and walked around and checked the tents. I think the whole place smells like… grass. 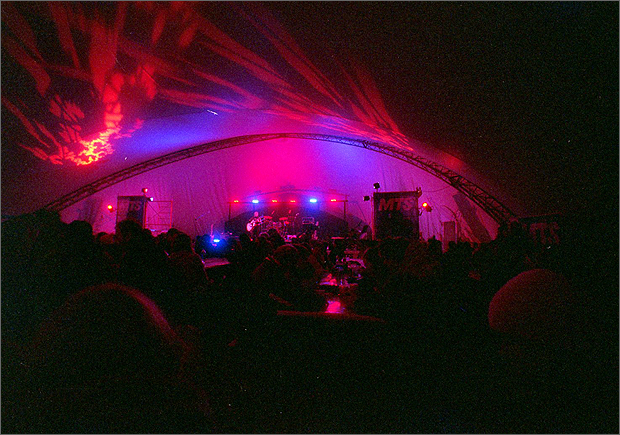 I love the energy of the people there. G was excited to check the musicians scheduled to perform that night (I enjoyed the lady who performed at the MTS tent. The tune was folk-ish but home-y at the same time). I was excited to see the sculptures and of course, take photographs. When we entered Fort Gibraltar, the small ports there have people dressed up and explaining the history of French Canadians to the visitors. 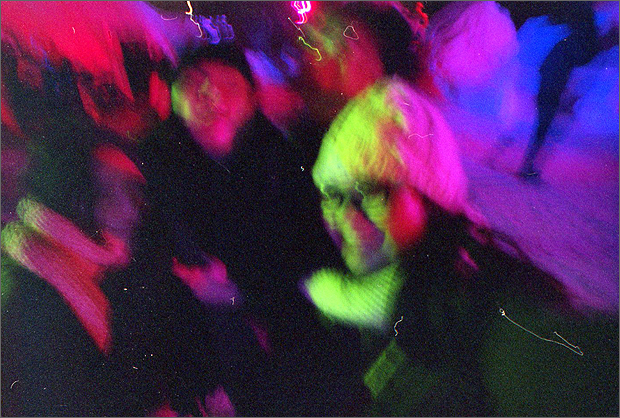 (It’s not a krappy camera without a blurred psychedelic photo) 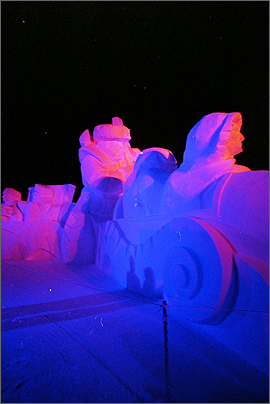 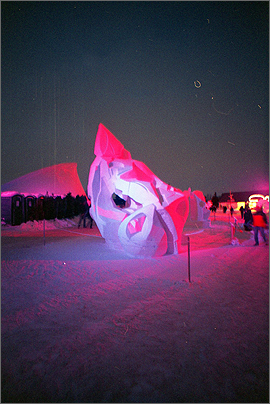 At one point my Rollei 35S had an accident and the film was pulled out of the canister while rewinding. Oops. I used my LC-W after that and found that it was much easier to use. The 400 ISO handled the dark pretty well, although I should have used my 800 ISO film instead. Maybe something to keep in mind next time.

BTW both cameras fogged when we enter one of the tents (changing temperature). I had a couple of frames were the photos were blurred due to the condensation.

All in all, I enjoyed my experience there. I haven’t been going out lately, so photos are scarce, but if I go somewhere and just shoot, the act allows me to practice and also discover something in my city (which is always a good thing!).

—–
To know what the Festival du Voyageur is all about, visit the event’s official website.