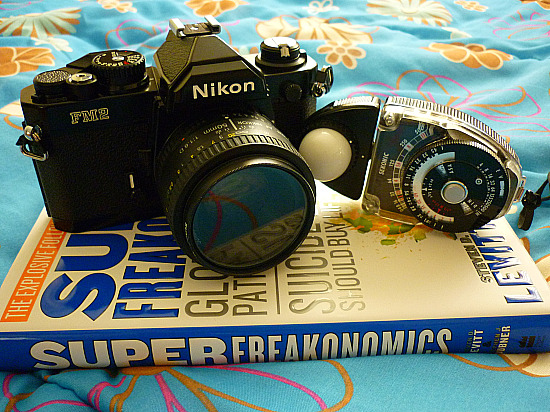 My boyfriend has pointed out (in several occasions) that every time he scouts for good deals re: photographic equipment, he gets the not-so-good ones. But when he finds stuff on my behalf, I get the best stuff.

Anyway, these just got in the mail this week. He has found me a very very beautiful Nikon FM2n in black. It has always been my dream to own my own mechanical Nikon SLR but the price isn’t too good out there. And then my boyfriend and I stumbled upon this one. I also got a used (but very minty) Sekonic light meter.

He calls this the “evil camera”. He spent a considerable amount of time staring at this camera, claiming that it absorbed his energy. Ha ha. Aside from small scuffs and one distinguishable brassing at the top, the whole body’s in pristine condition — shows that the owner did really take care of this baby. Same thing with the light meter (they were owned by different people). I know that the marks add personality and history to film camera bodies, but it feels different when you have an almost-new unit.