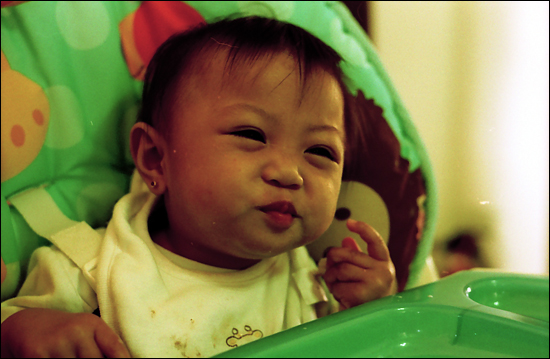 OCTOBER 31, 2010 – Unfortunately this adorable bugger won’t be visiting her ninang because of stomach flu. 🙁

So I have already used K’s beloved Nikon N80, his very first camera. I ran two rolls in it (one roll of Ferrania Solaris 200 and one roll of bulk Ilford film). I just realized that I actually don’t like using the AF Nikon film SLRs. Don’t be mistaken — I like my Nikon F55, but sometimes I get that feeling that I can make better photos using their non AF bodies like Nikon FM2n.

Or maybe it’s just me.

Also I have discovered NOT to use Solaris 200 indoors. That film is awesome outdoors but not much indoors. Speaking off, I should check my nearby grocery if they stocked with Solaris.