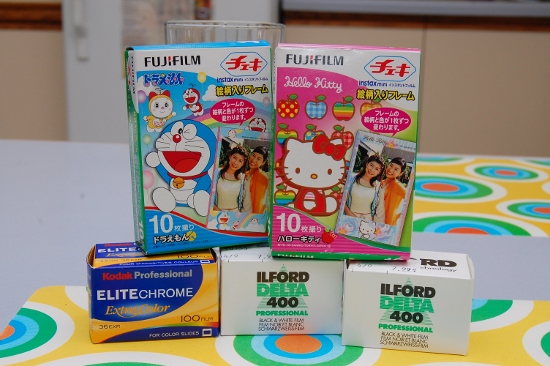 Unfortunately, I didn’t bring the rest of the film stack I have back in Winnipeg (majority of them I bought from Manila last year), as I thought that I will be shooting more using my D40 than my LC-A. But then I ended up asking my cousin to ship my AE-1, and now I only have four rolls of film left. o(>_<)o Last Saturday, I went to buy three rolls of film at Don's Photo. I don't have any black and white films left so I decided to get two Ilford 400ISO (the one that I regularly use in 'Peg), and one Kodak Elite Chrome (I have no more slide films left, the shame!). I'll most probably get more later in the summer. I also stumbled on an international seller on eBay that sells economically-priced Fuji Instax Mini / Chekki films, so I got three packs (for now). As far as I know Henry’s sell them, but a.) There’s no Henry’s here in Edmonton; and b.) There’s shipping charges, and the one that I bought on eBay was shipped for free.

Anyhow, so I got the packages of instant films last Tuesday. I got the ones with the cartoon characters on it, for a change. 😉 The Winnie the Pooh one’s already in my camera, and I’m saving up the Doraemon and the Hello Kitty ones.